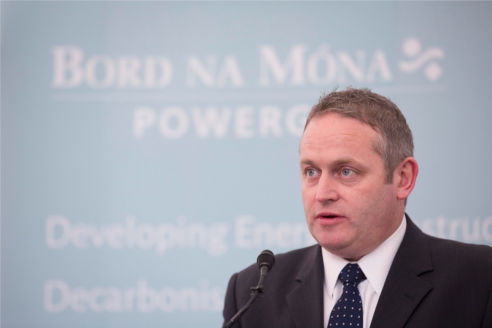 Bord na Móna today switched on a new, clean, green energy supply as it opened Ireland’s first ever wind farm built on a cutaway bog in the Midlands. The 84MW wind powered facility will supply the Irish grid with enough electricity to power 45,000 homes. The wind farm at Mount Lucas in East Offaly is one of a series Bord na Móna is committed to constructing in the next seven years. 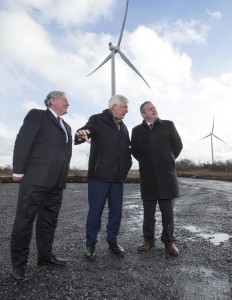 Bord na Móna Managing Director, Mike Quinn, said “This wind farm is part of our answer to Ireland’s twin energy challenge. It is becoming ever more apparent that we must reduce our chronic dependence on gas and oil supplies from unreliable sources. Even more critically we have a pressing obligation to de-carbonise our energy supplies to radically reduce green house gas emissions and help Ireland avoid significant missed target penalties.

Bord na Móna has been an energy producer here with strong links with the community going back generations. This heritage was built on by the company as it developed the Mount Lucas Community Benefit Scheme which will benefit the locality for years to come. We are also investing in a bog rehabilitation programme and are developing a 5km amenity trail for walkers and outdoor enthusiasts to enjoy the beauty of an Irish bog”. 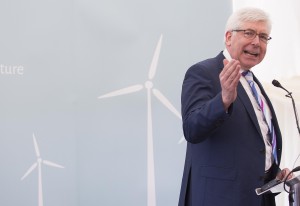 The new wind farm follows one of the biggest infrastructure projects in Ireland in the past three years, and consists of 28 turbines on the 1100 hectare site.

This project, which will contribute to meeting Ireland’s 2020 renewable targets, is the first wind project in this key area. It is considered a huge practical advance for Bord na Móna’s energy development plans on its extensive Midlands landholding.

Bord na Mona is hugely experienced in this area, with a history of investing in wind energy since the early 1990s. In this time the company has worked with companies like Siemens, the turbine supplier at Mount Lucas, to get the highest return from its natural resources and drive sustainable energy production in Ireland. Work is underway on practical wind energy assessments of Bord na Móna‘s extensive landholdings in the region and the company will work with everyone in the area to secure a sustainable future for the people of the Midlands.

Bord na Móna pursue a policy of ongoing engagement with local communities in areas where it is developing wind energy resources. During the development of Mount Lucas the company met with community groups, held open days, community meetings and established a community benefit scheme.