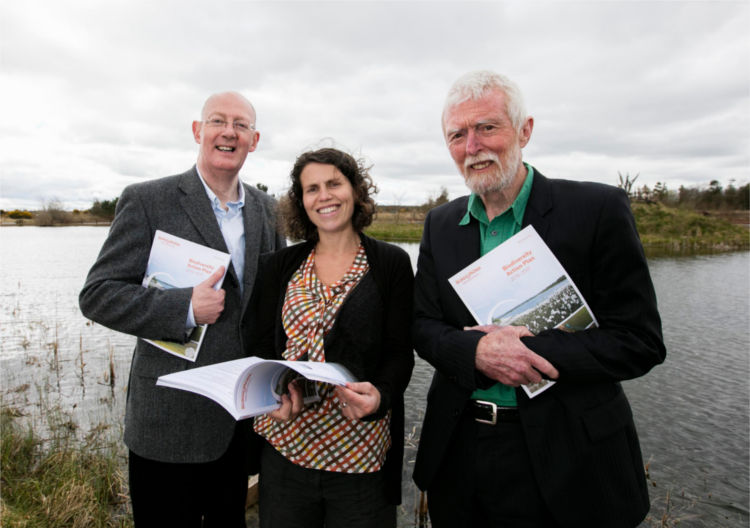 Bord na Móna today confirmed that it has rehabilitated close to 12,000 hectares of the company’s boglands which amounts to over fifteen percent of its total landholding to date. As part of that work, the company has actively restored over 1,000 hectares of raised bog since 2009 and aims to increase this figure in the next six years. The company has begun its transition away from harvesting peat for energy production and has committed to a comprehensive and informed bog rehabilitation programme. The figures were announced at today’s launch of the company’s Biodiversity Action Plan 2016-2021.

Speaking at the launch, Bord na Móna Head of Land and Property, Gerry Ryan said “Bord na Móna’s land is an asset, not just for our company but for communities across Ireland. Our strategy, outlined last year in Sustainability 2030, is a vision of a future where Bord na Móna is a sustainable, profitable company, committed to protecting the environment and delivering benefits to the community and to our employees. In our strategy we announced, key business decisions that will result in the biggest change of land use in modern Irish history with 50,000 ha to change use by 2030. Our plan is to sustain a healthy natural environment by driving down our carbon footprint, developing environmentally friendly goods and services, rehabilitating bogs and increasing biodiversity on those lands. All of these outcomes will bring rich rewards to people living near our landholdings and to the nation as a whole.

We are hugely proud of the fact that we have now rehabilitated up to 12,000 hectares, and look forward to increasing this further in the course of the new plan. This Biodiversity Action Plan identifies how we are going to help make that happen on significant areas of Irish bogs.”

Also speaking at the launch Bord na Móna Chief Ecologist Dr Catherine Farrell said “Under the 2010-2015 Biodiversity Action Plan we successfully mapped and studied all of the Bord na Móna bog areas. This allowed us to develop measures to ensure each bog is rehabilitated according to best practice and expand core areas for biodiversity. Habitats that have already benefited from the work are wetlands and woodlands – now relatively scarce in the wider Irish countryside, while species such as breeding waders and other rare bird species are also finding space on the rehabilitated bogs to secure successful breeding sites as they are marginalised from other traditional breeding areas across Ireland.

We will continue that significant work under the 2016-2021 plan, working with all our stakeholders to ensure responsible management of each of our bog areas, informed by the ongoing monitoring of the bogs (ecological and carbon emission aspects). We will add to the rehabilitation and restoration work annually, taking cognisance of the evolving value of the cutaway and raised bog areas under the framework of natural capital thinking.”

Key actions under the new plan include;